Winters in Vermont take some getting used to. It took me about four years before I got over expecting crocus and daffodils in March and accepted the fact that the brief and beautiful summer closes down shortly after trees begin their seasonal dance of color sometimes as early as August.  Winter was the hardest, however, because it took a keen eye to see the subtle shifts in nature during this most daring and dramatic of seasons. But the stark space of Winter allows you to see things that are disguised during the cover-up season of Springsummerfall.
This year, the very tippy-top twigs of naked trees captured my attention as they stood out against the sky seemingly flinging themselves heavenward singing: “Here I am --- take me” --- offering with full confidence that their destiny was to become One with the Universe.  Perhaps these newbie twiglets from last year’s birthing do not realize that they stand on the backs of the branches before them who once upon a time also reached to the sky vibrating: “Here I am --- take me.”

Such is the cycle of life. New growth reaches out boldly with energy, hopefulness and innocence not fully realizing that it is only their connection to the whole that gives them their being. The essence of their slim twigginess only exists because it is affixed to another “branchlet” and that small stem --- not much older in terms of seasons --- finds itself secured to a branch --- and that branch to a limb and then to a bough and then to a trunk whose roots forage deeply and silently with outstretched foundation to anchor the whole, feed the many and water the sky. 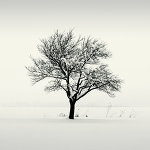 The mighty trunk that was once a tiny twig itself crying “Here I am --- take me” has become what it was meant to be.  Could it have guessed at its destiny when first it took shape and form?


So, little twiglet…so bravely and naively clambering to the sky – what lesson do you have for us? Do the cries of: “Here I am, God --- use me” really fall on deaf ears?  Does that which you see as a precious gift seem to be not particularly treasured in God’s sight? Can it be, tiny beacon of longing, that there is another aspect of your calling that beckons and bids you pay attention? Something that does not fall within your comfort zone so readily? Something more in tune with your “being” rather than your “doing”.

Perhaps that which is yearning to make itself known to you in fresh ways will be your connection to that which roots you --- leading you through the next season of your growth and sustaining you to  become that for which you were created.