Publisher's note: I happily invited my Mom, Vera Allcroft, as a guest blogger in order to publish this story she has just written.  Mom lives in Florida with my Dad and she is still exhibiting her strange condition of never growing up, now 87 going on 10. 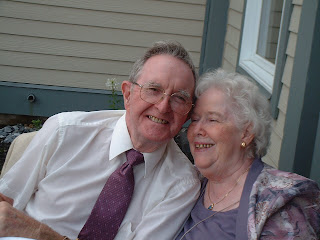 At the sound of the bat hitting the ball, we all screamed, “Run, Kate, run!” and my  granddaughter took off, running as fast as her six year old legs would allow.   The ball flew past the pitcher into the bright green grass, then bounced up to the outfielder’s glove.  He would have thrown the ball to first base for the first out of the game, but our teams were short on manpower and there was no first baseman, so Kate was safe.

A short while before, Kate and I had been sitting in the sunny family room of her home.  A gentle breeze stirred the curtains at the window and we could hear the katydids buzzing in the grass.  I was teaching her the beginnings of embroidery and as she carefully placed her cross stitches, I worked on my own counted cross stitch.  It was a summer afternoon in the quiet state of Vermont and our sewing lesson was a peaceful place.

Suddenly, the screen door banged and her brother, Gavin, and his friend, Larry, came in with an urgent request.   “Grandma, will you and Kate come out and play a game of baseball with Larry and me?”  Now an opportunity like that doesn’t come along very often so Kate and I quickly dropped our needles and thread and trooped after Larry and Gavin to the side yard where we quickly decided to have two teams – the girls against the boys - a six year old, two eight year olds and a 60 year old going on 10. 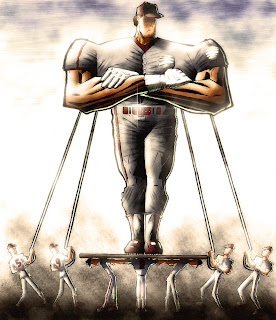 It was decided on the basis of courtesy to the senior member of the teams, that the girls should be up first.  Gavin became the pitcher of the opposing team and Larry became the outfielder.  Kate was up first, and when she swung at the first pitch and missed, the ball sailed past us, hit the road and went dancing down the street.  The ball curved to the downward side of the hill on which they lived so it was quite a run for the four of us. The hills in Vermont are long and we only caught up to the ball when it got stuck in a ditch.

At that point, we decided we needed a catcher – it was between the non-hitting member of the “Up” team or the outfielder of the other team.   The vote was unanimous that the non-hitting member of the up team should be the catcher because the outfielder was really needed to keep the ball from running into the shed at the back of the property.   So as Kate stepped up home base again, there I was, in my new position as catcher.  Again the ball was thrown, and again Kate struck and missed.  I felt the ball nick my glove as it sailed past  and bounced down the hill again.  Since it was my job as catcher to return the ball, all the other players watched as I strolled casually down the hill to the ditch where the ball had stopped the first time.  As I plodded back up the hill that grew steeper with each step, I had a feeling there was something out of whack with this game. 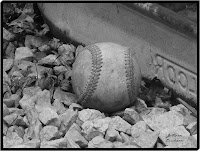 It was on the next try that Kate at the bat connected with the ball and off she went to first base. After lots of cheering, I realized I was no longer the catcher – I had been promoted to hitter, and this set off another round of negotiations on who was going to be the catcher.  I announced loudly that I wasn’t going to chase the ball down the hill again, so it was decided that Larry, the outfielder, could change positions temporarily because we could see the shed wasn’t really in too much danger of being hit by the ball.

Luckily, I hit the ball on the first throw and off I ran, heading for first base.  Kate took off for second base and all would have been well except that as I reached the base I slipped in the dewy grass and actually slid into the base in sort of a laying down position.  This shocked all the players and they forgot about the game as they rushed over to see if I was hurt.  I assured them I was okay although in the privacy of my own mind I was beginning to realize this was a nutty thing for a 60 year old going on 10 to be doing.

To get back to the game, we took stock of where we were  - I was on first, Kate was on second, we had no outs, BUT, and this was a big BUT, we had no more hitters to be up at bat.  At  this point in time, we decided to abandon the game and go in the house to have a glass of Koolaid along with a couple of cookies.  After discussing our performances, we came to the conclusion that if you are going to play a game of baseball it is better to play with more than two people on a team. 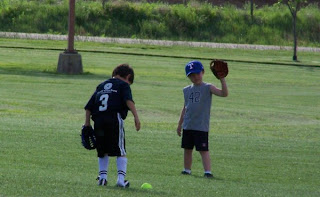 I learned important lessons from that game – the first and most important, never pass up an opportunity to have fun.  Second, playing baseball with your grandchildren is like catching the gold ring on the merry-go-round.  I was leaving for my home in Florida the next day so this time had been very special to me.  The sweetest part of my memory of that day is when my daughter told me she overhead Larry say to Gavin, “When is your grandmother coming back?”

It’s great to be wanted, no matter what age you are.

Posted by Carole Wageman at 8:18 AM